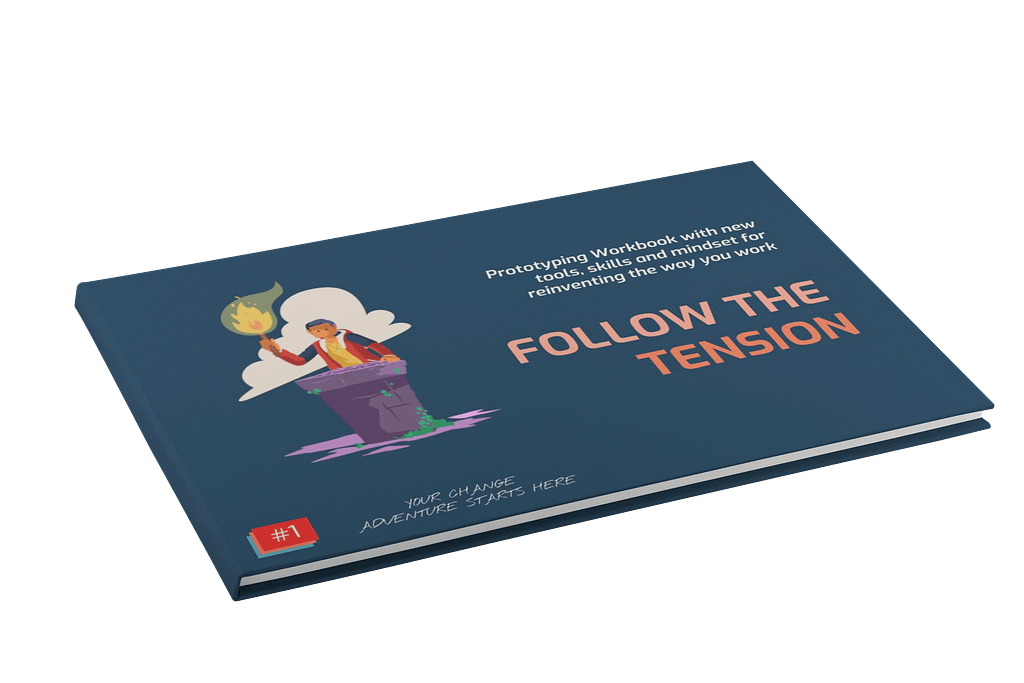 The essential workbooks for teams and organizations that want to change the way they evolve. These workbooks contain easy-to-use tools, real-life examples, and concise steps to start prototyping.

What others say about our Workbooks

Jan DirkWorks at Philips
Read More
I love the energy and practicality of the Workbook, I can't wait for the next one.

Rik de JongProduct Owner at Bitfactory
Read More
Not only about what to achieve, but also how and what alternatives there are.

Anna MeziersSelf employed Change Agent
Read More
If you are a Change Agent. You don't want to miss out on this opportunity. RTFM from now on stand for "Read The Freaking Masterpiece"

Russell Windt
Read More
At the price of not even an hourly rate, you are not only getting 1 workbook, but 3. So much wisdom in these handcrafted workbooks.
Previous
Next

"I know our way of working is not smooth, but this is simply the way we do things here"

Hi! I am Edwin van der Geest, and I am an Organizational Change Agent who knows the struggle of improving and changing an organization for the better.

I used to be a Managing Director at an IT consultancy firm. Like many leaders, I always wished I could change whatever was necessary for the company. But every time I tried to change something for the better, I got stuck. I was often facing resistance and the phrase “That is not the way we do things around here”.

After many failed attempts (and truth be told, also a couple of successful ones), I started to recognize the patterns that science already had proven. The top-down initiatives were the least successful, and the more significant the initiative was, the higher the chance of failure. That’s when I realized we had to change the way we change.

Prototyping Work is founded based on the belief that successful change only can happen in a consistent and participatory manner. Don’t force old fashioned (and proven unsuccessful) ways of changing to your employees, but invite them to lead and be part of it.

Prototyping is a way of evolving an organization by using small but radical experiments. These experiments create forward movement in your teams and unleash energy and excitement within your organization. As a result, your changes will be much more tangible. Using Prototyping provides the employees with a chance to change the organization bottom-up.

Change with bravery, not perfectionism

Here is a brave step that I bet looks easy, but you likely never made:

Cut the scope of your work improvement idea in half

You probably have a ton of ideas to improve your organization or team. Chances are, none of them become a reality. They stay in your head or on a post-it during a brainstorm session. If this is you, let’s do things differently: make one of your ideas so specific that you can start implementing it today. I’m for real. Not tomorrow, but today. If it is still too much of a radical change, you can cut the scope in half. Use our Prototyping Work Canvas for that.

Everyone can make a change. It doesn’t take any talent or an expensive consultant to make that change. Once you get the feeling of chopping change ideas into small prototypes, you never want to go back.

Most change projects are missing the mark

Change projects focus on assumptions, planning, and complexity. They manage resistance. And most of the times, they copy from ‘inspiring organizations’ or push you into a complex, time-consuming framework. That never helped employees. Change is not a project; it’s a continuous process.

Change is a threat when forced on us, but an opportunity when done by us.”

My partners and I have more than 30 years of combined experience working in progressive organizations. We’re obsessed with people centricity and simplifying complexity in organizations. We’ve learned the hard way that copying other organizations doesn’t give the best results. We started prototyping, so we could become that inspiring story ourselves. Now, we’ve developed a methodology based on our combined experience, so you can quickly get started yourself!

Over the last few years, we’ve helped many teams and employees to get better at changing through workshops, tools, practices, and our newsletter. And now we bundled all our knowledge into our Prototyping Workbooks.

What's inside the workbooks

At first, we planned to write a book about our methodology. However, we soon realized that applying all the lessons, tips, inspiration, exercises, and examples yourself can be immensely difficult. And not only that, it would mean that we are another management book talking and inspiring change, but not helping you directly.

That’s why we decided to do things differently and write not one theoretical book, but three Workbooks. Each one tackles a different part of the methodology and guides you through straightforward steps, easy exercises, and examples to help you start changing.

Find the one thing that is holding you back (your ‘tension’). It is the kickstart for your change adventure. We will help you find improvement opportunities, gather learnings, and eventually overcome obstacles to fix this tension.

Prototyping is where the magic happens. With your tension defined, we will guide you through the prototyping process. Become brave. Get inspiration, brainstorm for opportunities, and design a radical prototype on a non-radical scale.

The power is in the rhythm. It’s essential to consistently walk through the steps to solve all tensions and evolve into the progressive team you want to be. Validate your prototype and learn as soon as possible. Adapt when needed, and scale when you have the opportunity.

What you can expect inside each workbook

We’ve created Workbooks for a reason. We want to get you active and make a change, not just set the intention. Our exercises are made so you’ll want to get actually get started!

Got stuck during the process? Don’t worry. We got you covered with inspiring and real-life examples. Learn from real teams who’ve done what you are about to do.

And if that doesn’t isn’t enough, we’ve asked dozens of experts in the field to share their insider tips with you.

Go from one post-it to a real tangible and ambitious plan in a matter of minutes, not hours or days. The Canvasses will help you to make that happen by facilitating the collaborative thought process.

We’ve created A3 sized canvasses for you to print and use in your team sessions.

There is so much valuable content out there from experts in their field that it can quickly overwhelm you. We’ve collected and curated the most useful resources for you from thought-provoking sources like HBR, IDEO and Medium.

We are also continuously collecting more insider tips from thought leaders worldwide to provide you with the insights you need.

The Prototyping Workbooks are a great way to experience the power of the methodology. For leaders, HR professionals, and change agents who want to ignite a transition in their organization. A shift to becoming a progressive organization. This transition starts with a tension, which is the gap between where you are and where you want to be.

Find the one thing that is holding you back. That will be the kickstart for your change adventure. Once you have mastered how to define your tensions, you’ll never run into them again! Use it to find opportunities for improvement, gather learnings, or to overcome obstacles.

The power is in the rhythm. It’s essential to consistently walk through the steps to solve all tensions and evolve into the progressive team you want to be.

What format are the files?

The format of the workbooks are PDF. If you want it in another format, let us know and we’ll see what we can do!

What will I receive?

You will receive the latest available version of the Workbooks (if they are already launched), and all related content such as the canvasses. Next to that, you’ll get updated versions when available with our lifetime deals.

What do you mean with "Lifetime Updates"?

We love to prototype, take small steps and improve over time. That is why we also believe that a Workbook like this isn’t fully finished right after publishing. We will undoubtfully have new insights in the future. We’d like to update our Workbooks accordingly. For how long? “Lifetime” refers to the lifetime of the book (not your lifetime! That would be very long!). Realistically? We’re not sure, but we expect this to be a few years for sure, or until we think it’s properly ‘finished’.

Can the price be lowered? Are there discounts?

The price of our entire Workbook collection is less than the hourly rate of the average Management Consultant. Our workbooks are packed with years of knowledge and experience. If you still think the price is too high, we’d love to know why snd who knows, we might reconsider our pricing.

When are the second and third workbooks coming?

We’re working so hard that steam is coming out from under our keyboards. We are aiming for end of Q2 for the ‘Design your Prototype’ Workbook and Q3 for the ‘Evaluate & Learn’ Workbook. In any case, we’ll keep you posted. Subscribe to our newsletter if you don’t want to miss out on the other things we work on, too!

Are you planning on making a physical book?

We have been thinking about this, but for the time being, it’s a low priority. If however, you’d like to have a physical copy, please let us know. If the demand is higher than we anticipated, we’ll give it higher priority!

That would make us sad. But also grateful if you provide us with feedback about what you don’t like. We’ll try to improve the workbooks based on that. If you don’t have faith in us either, you can email us and we will see if we can give a refund.

Can I get more help with the methodology?

Of course, you can! We are at your disposal. We offer open taster sessions and open training, learn more about that here. And we can help you in-company as well, with coaching, facilitation, and workshop sessions.

I got a receipt, but can I also get an invoice?

An invoice? Is that still people ask for? Alright. After the purchase, our payment provider, Gumroad, will send you an email with a receipt and an option to generate an invoice.

Why is the price higher on my receipt?

Our payment provider, Gumroad, charges in Dollars. This means that you’ll still pay the correct amount in euros. In some countries, we are also obligated to add VAT (Value-Added Tax). If you have a valid company entity, you are usually able to get this back or even submit your VAT ID to Gumroad to get it back automatically. Need help? Contact us!

Good question. We like it if you share this page with someone else. And through our referral program, you can arrange a discount for them as well. But by sharing the workbooks with others, we are not able to maintain and improve the contents of it. From which you’ll benefit even more. We need your help, to help us helping you. Get it :)?